Serving Bristow Families For Over 90 Years.

Our funeral home will strive to help your family create the most personal and meaningful tribute to your loved one. We acknowledge that we cannot make the pain go away, but through our efforts we can make the journey of grief less lonely and perhaps a little easier. We are located at 119 N. Chestnut in Bristow, Oklahoma.  Our phone number is 918-367-3318.

Our Roots Are Deep in Bristow 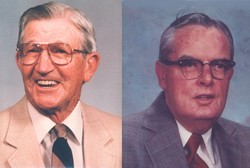 The present day Hutchins-Maples Funeral Home was started in 1918 as a “sideline” Undertaker Business on the second floor of Grooms Hardware Store. Marvin Sullivan purchased the business from the Groom family and moved it to where Bristow City Hall is currently located at 110 West 7th Avenue in Bristow, Oklahoma. Mr. Sullivan also owned Oak Crest Cemetery. After World War II, Mr. Sullivan deeded the cemetery to the city of Bristow and sold the funeral home to Claud Bates. Today, Oak Crest Cemetery is still operated by the city of Bristow, Oklahoma, and is known as Bristow City Cemetery. Raymond Maples became partners with Mr. Bates, eventually purchasing full ownership.

George Hutchins had worked several years for another local funeral home and decided to start his own business. His business location was 119 North Chestnut Street, the location of the funeral home today. In 1970, at the suggestion of several friends, Raymond Maples and George Hutchins merged their funeral establishments. Together, they owned and operated Hutchins-Maples Funeral Home until their retirement in 1982. Pat Mayes purchased the funeral home from Mr. Hutchins and Mr. Maples. Mr. Maples remained active in the Hutchins-Maples Funeral Home operations until his passing on September 25, 1993. Mr. Hutchins moved to his hometown of Davis, Oklahoma, and lived there until his passing on August 30, 1995. Mr. Mayes owned and operated Hutchins-Maples Funeral Home until his succession with the Loewen Group in 1994 and subsequently to the Alderwoods Group. Our funeral home is currently locally owned by the Matherly and Tankersley family.

Today, the current funeral home staff carries on a long, proud tradition of sincere, thoughtful service that began as a “sideline” business back in 1918. Our funeral home family is comprised of employees that are rooted in Bristow, Oklahoma and surrounding area. Each member of our staff is truly dedicated to those families we have the privilege to serve. Our daily strive is to provide the quality service each family so richly deserves; the type of service that had been established by Mr. Groom, Mr. Sullivan, Mr. Bates, Mr. Hutchins, Mr. Maples, and Mr. Mayes.